Tarmac Sealer is formulated with a blend of technical acrylic resins that restore the original colour, flexibility and weather resistance of the tarmac surface 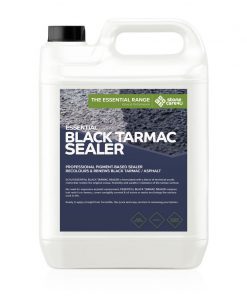 StoneCare4U Essential Black Tarmac Sealer is the perfect product for reviving tarmac that has lost colour, becomes prone to cracking and is suffering from the loss of surface stones. Often referred to as tarmac paint or tarmac restorer, a good tarmac sealer does so much more. A tarmac repair paint may not last long, whereas a tarmac sealer will provide lasting protection to the colour and condition.

Easy to apply by roller, StoneCare4U Essential Tarmac Sealer not only re-colours the tarmac, but it also creates weather-repellent skin that protects the tarmac from further deterioration. Cost-effective and durable, our Tarmac Sealer will transform your drive, car park or tennis court leaving it looking like new.

Demand for tarmac sealer and tarmac paint has increased considerably in recent years simply because of the ongoing maintenance now required for the millions of square metres that has already been laid. Across the UK and Ireland over the last 100 years or so, tarmac has been one of the most frequently laid surfaces both domestically and in the commercial sector. It has been used extensively for domestic driveways, paths, car parks, sports grounds, industrial areas to name but a few. There is so much demand to carry out a tarmac repair on these surfaces mainly in the winter months due to frost damage.

Although it is a surface that has been used extensively and is relatively inexpensive to lay compared to other popular surfaces, it does have its own issues which we will outline further in this article.

Superior To A Cheap Tarmac Paint

Although tarmac can come in a number of colours, the vast majority of what has already been laid is black. Furthermore, when it is first laid it is rich in resin which gives it flexibility and helps prevent surface ‘fretting’ or cracks appearing as it dries out. The resins within the surface also bind the tarmac aggregate together to ensure the surface is hard-wearing and able to withstand vehicle’s trafficking back and forth. It is not the most attractive surface to look at compared to some other surfaces like natural stone or imprinted concrete but it is cheaper to lay and can last a long time. However, over time the resins within the surface of the tarmac will dry out due to constant exposure to UV light. Furthermore, this may lead to loss of colour as well as a general deterioration of the surface. The tarmac restorer will help to prevent colour loss and extend the durability of the tarmac.

How To Apply A Tarmac Sealer

To help rectify problems that occur when the surface starts to show signs of deterioration, a tarmac sealer can be applied using a roller or brush. Deterioration usually starts with colour loss as a once very black tarmac surface can soon turn a much lighter shade of grey after repeated exposure to sunlight. The sun will not only cause the colour to fade but if left too long can result in surface ‘fretting’ as the aggregate starts to loosen up. Potholes and cracks are other issues that can quickly get worse, especially with the ‘freeze thaw’ cycle and should be dealt with sooner rather than later. Because of these issues, applying a tarmac driveway sealer can help to prolong the lifespan of the surface in a number of ways and is certainly a better and cheaper option than replacing the surface. A tarmac sealer will make the surface water-resistant rather than impermeable to water penetration as it still has to drain away. It will also help to put back any lost resins into the surface which will help to restore its elasticity which in turn will prolong its lifespan. If a top-up coat of the tarmac driveway sealer is applied every 3-5 years it can help to keep the surface looking good for many years in the future.

Benefits Of The Tarmac Sealer

Sometimes a tarmac sealer is referred to as a tarmac paint or tarmac restorer and although both descriptions can be used they both are really the same term as tarmac sealer. Many people search online for tarmac paint when the original colour starts to fade so it makes sense. Likewise, homeowners also look for a tarmac restorer to restore the original colour of the surface. However, cheap tarmac paint is not recommended as it can quickly peel off over time even though it can look great when first applied. Essential Black Tarmac Sealer is far superior to any tarmac paint; it restores colour to the surface as well as improves its durability. Applying this highly effective tarmac restorer can help save you a considerable amount of time and money and avoid the need to dig up and relay a driveway.