Easily applied by its sprayer nozzle, our unique powerful formula does not only remove the mildew but helps to prevent re-growth.

Mildew Remover will quickly remove even the most established mildew

Mould and mildew can show up as dark stains on the grouting in your bathroom, and that is why you need mildew remover. Unfortunately, regular cleaning agents don’t always remove these stain. What’s more, you often find that the spores survive even after a hard scrubbing session, and return to torment you just a few days later. A good mildew remover for walls and floors in bathrooms and kitchens can help keep these areas clean.

Ideally, you’d like your bathroom to be utterly spotless, free from any mildew or mould. Our mould and mildew remover not only removes the stains that mould and mildew cause but also contains agents that prevent either from coming back. With our cleaner, you can remove gunk and grime from your tiles and grouting in your bathroom without having to fear that you’re doing it in vain. Once you’ve finished cleaning, it’s gone for good.

Our mildew remover for walls is incredibly easy to use, and it works fast too. All you need to do is shake the can well, position between three and five centimetres from the affected portion of grout and spray. Then leave the cleaner to do its magic, killing and removing mould and mildew in as little as 20 to 30 minutes.

While highly useful as a sealant, silicone grouting can be a magnet for mildew and mould. Our mould and mildew remover can help here too. All you need to do is spray the affected area and then leave the cleaner to penetrate the silicone for two to three hours. Afterwards, clean away the residue with a sponge and water to reveal the new, sparkling white grouting. It’s that simple.

What Is The Difference Between Mould And Mildew (And Does It Matter)?

Mould and mildew might have a similar appearance, but they’re actually two distinct biological organisms. (Mould and mildew remover will kill both). Mildew is a type of pathogen that infects plants. It is a member of the fungi kingdom in the order Erysiphales. While you can get mildew indoors, you find it most often on plants. The reason for this is that mildew requires the plant to go through its lifecycle to allow it to complete its reproductive process.

There are two kinds of mildew that you can find on plants and which could get into your home: downy and powdery. You usually find downy mildew on agricultural products like grapes and potatoes. It has a fuzzy appearance and often shows up as yellowy-orange spots on leaves. However, it can also live on the fabrics in your home. Powdery mildew takes the form of grey or white-looking splodges and has a structure of their own. Again, you can find this type of mildew in your home, although it is not as harmful to your health as mould. This mildew typically affects the cabbage family.

Mould is another type of fungi, but the way that it propagates is different from mildew. You can kill mould with mould and mildew remover. Mildew doesn’t create any indoor spores that get into the atmosphere and lungs of people in your family, but mould does. What’s more, mould typically shows up as large black patches and can live on practically any surface in your home, even in low light conditions. If you see black stains on your grouting in your bathroom, it’s likely a common species of mould, not mildew.

Why Remove Mould And Mildew?

Mould can have adverse effects if it takes hold in your home. Here are some of the problems that you might encounter is you don’t use mildew remover walls.

Did you know that the average person spends around 90 per cent of their lives indoors? Because of this, indoor air quality matters. Both mould and mildew, however, can lead to a reduction in air quality. Mould releases spores into the atmosphere and these, in turn, can get into the lungs of people in your family, causing unpleasant reactions.

The best way to control mould in the home environment is to use mildew remover on walls and grouting. These contain vital chemicals that prevent the mould from returning and causing further damage to your health in the future.

Researchers have identified a variety of moulds that can cause eye problems, including phagophore, Stachybotrys, and Aspergillus chaetomium. The spores of these moulds can lead to progressive inflammatory reactions which leave the eyes looking red and feeling itchy. Some people can develop “pink eye” symptoms that appear similar to regular bacterial and viral conjunctivitis. Again, mildew remover can help.

Prevent Irritation Of The Mucous Membrane

The body keeps its airways supple using a mucous membrane. It is just a thin layer of mucus that keeps the airways open and comfortable, removing unwanted particles as they travel into the lungs. Mould spores, however, can irritate the lining of the lungs and trachea, leading to an inflammatory reaction. This reaction, in turn, can make breathing difficult, lead to asthma attacks, and cause headaches.

It’s vital, therefore, that you remove mould from your environment as soon as you notice it. With our grout cleaning solutions, all you need to do is spray the affected area and then wipe it down. Our mildew remover for walls is that simple!

Where To Use Mildew Remover

While mould and mildew can show up anywhere in your home, the most common location for it is along grouting near sources of water, like your shower, sinks, and bath. The good news is that it is easy to tell whether you have a mould problem in your bathroom. Mould shows up as a dark streak along an otherwise section of white grouting or filler.

We offer cleaning mould and mildew remover that helps to eliminate unwanted mould. But you can take preventive action too to stop it from appearing. Here’s what to do:

Do you need mildew or mould remover? If so, then choose our Essential Grout Mould Cleaner today. It eliminates mould around tiles, giving you a sparkling, beautifully clean finish. 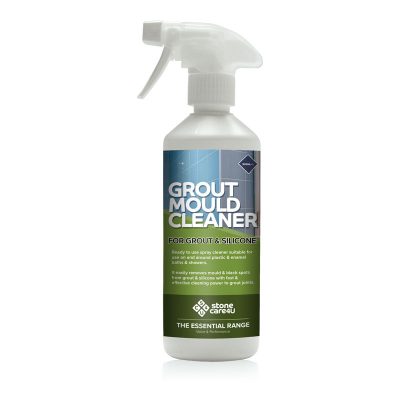